I will never be able to recreate the range of emotions that must have raced across my face when I opened a package a few days ago to find a graphic novel titled Mr. Colostomy. The title alone produced waves of consternation, but that’s nothing compared to the annoyance produced by reading the thing.

I consider “having something to say” to be the minimum requirement for a comic, or any creative work. That’s not to say that an assortment of random expressions can’t be art, or that it’s worth a creator having fun making; just that these types of projects usually have an audience of one, unless it’s screensavers or an ASMR video meant to be skipped. Anyway, read on for my hatchet work on Mr. Colostomy.

Luckily, there are some very successful books this week, especially in the form of graphic novel collections and paperbacks – add them to your spring or summer reading list now. (Also released this week is a coloring book full of gruesome black-and-white body horrors by Junji Ito, a nice thing to carry around and color in if you want to look like a dangerous murderer.)

Thanks as always to Phoenix for helping sort out the builds and knowing my tastes well enough to not even bother to recommend Mr. Colostomy volume.

An excellent entry into the Still water series, this anthology brings together a handful of grim stories about people who tried to escape from a city where no one dies and no one is allowed to leave. This world has been fleshed out quite extensively in two volumes that have already been released in paperback collections; but impressively, you don’t need to have read them to follow these bite-sized adventures. Framed around a series of campfire stories, the first short tale reflects on a husband left behind; the second is about a young homosexual who wants to escape the cycle of nothingness in small towns; and the third provides only a glimmer of optimism – but don’t count on that sentiment to last long. These stories are brutal and dark, but if that’s your cup of blood, consider this an invitation to read past issues. The final arc of the series is expected later this year. 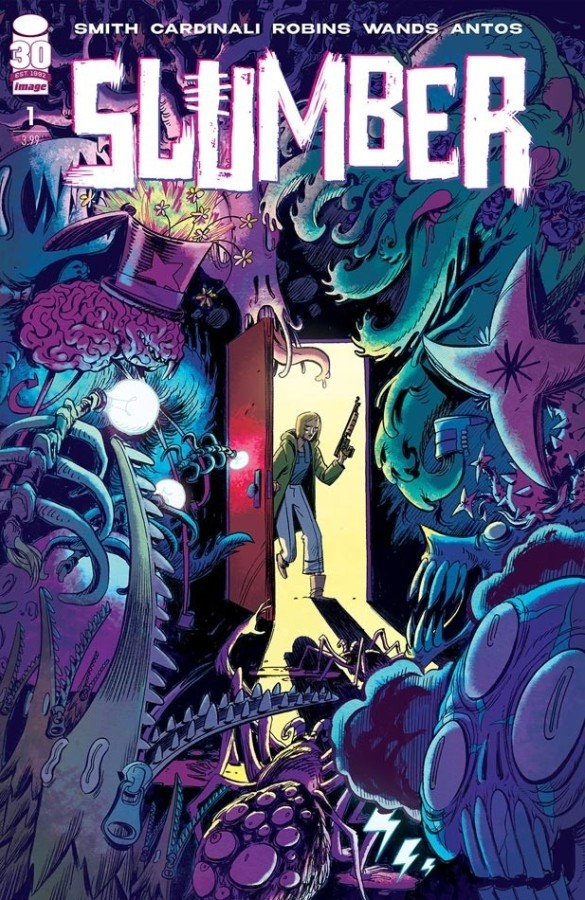 What I wouldn’t give for a few more shots in this otherwise well-crafted new series about a mysterious malevolent force that invades the dreams of innocent people and forces them to kill. A tough assassin struggles to keep this evil force at bay, hired to penetrate the minds of sleepers and hunt down the source of their nightmares; but where can she turn to tackle her own unpleasant dreams? That’s a hard question to answer, because it’s hard to know where ANYTHING is going in the last half of this book. The story twists, mid-page, to new places and times, some of which may or may not be dreams – it’s hard to tell. As a mechanism to confuse the reader, it’s effective. But as the jumps in spacetime pile up, it becomes exponentially harder to follow theories about where events happen, when they happen, and even if they really take place. Thankfully, some particularly strong characters manage to keep the action going by her seams, especially the bitter dream-chaser who struts around with a dark hero snarl but clearly hides deep wounds where she thinks no one can see. A scheming heroine who just needs to plant a few more signs to help us follow her through the neon carnage. 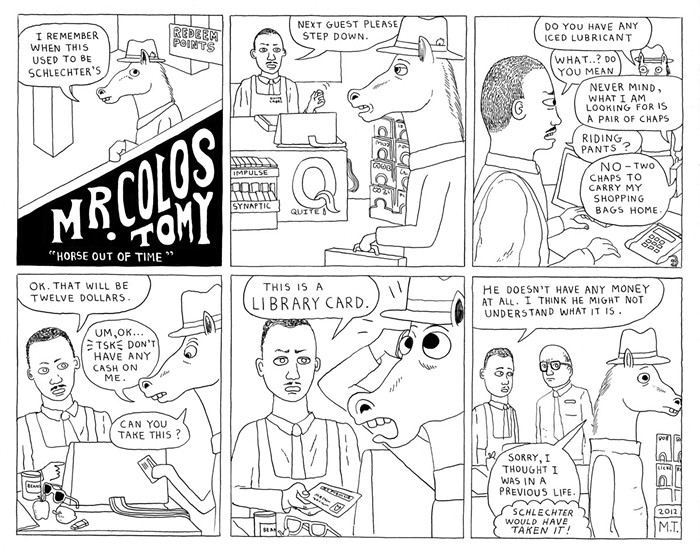 Finally a book that answers the question “what if we don’t try too hard?” Random images and text, drawn sequentially without any clear plan or effort to revise, present a disconnected non-narrative about a horse wandering through a city, missing children, and a stone gargoyle – much like looking through- over the shoulder of a bored student in algebra class, doodling in their notebook; or like combing through a pile of junk in hopes there might be some hidden gems. It’s no coincidence that the book is meaningless: according to press materials, which are funnier than anything I could ever intentionally write, the author creates by “parapraxis – meaning without forethought or penciling” . It’s not exactly what “parapraxis” means, or how “pencil” is spelled, but instead of dwelling on that, note instead that the promotional material also describes the author’s previous work as including “an olfactory performance” and a “choreographed sound dance”. Are the two just… a dance where he farted a lot? I ask because it seems as uplifting an experience as this book. “This comic honors error as a desired or hidden expression of the unconscious,” reads the description, perhaps spelling “honor” that way as an example of such an error. Alright, but whose unconscious are we supposed to express here? Authors? Whoever it is, the junk pile seems to have been picked up pretty well before we arrived.

ALSO: A HORROR COLORING BOOK, A RABBIT WITH A SWORD AND AN ASS 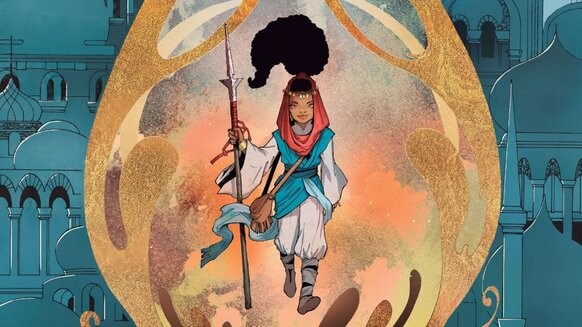 This week also released a fascinating coloring book by Junji Ito – it seems taboo to add color to Ito’s inimitable black-and-white body horror imagery, but let’s ditch the caution. Among the intriguing new paperbacks coming out this week are Adora and distanceabout a young woman fighting evil in a fantasy realm; best angels tells the story inspired by the story of America’s first detective; a whole bunch of Usagi Yojimbo issues are reprinted this week, if you like funny animal stories; and Masters of the Universe: Revelation comes together in a nice collection – I didn’t like the first issue but after watching the Netflix series the story grew on me. DC is new The best in the world places Batman alongside Superman… again. There’s also a new Marvel Nightwing, a hero who for some reason is known for his nice ass.