This is Artifacts where I will explore the Artifacts range from TopCow Productions. This first batch of readings will deal with the beginnings of the nascent universe. Over the next couple of weeks, we’ll be turning away from the two main series and instead focusing on their ‘Tales of…’. spin off. The potential for an in-universe vindication for this kind of spinoff was evident with “Witchblade” #9 which featured a somewhat confusing daydream of when Anne Bonny wielded Witchblade on the high seas. The first “Tales of the Witchblade” will run for 10 issues (#1/2-9), published between 1996 and 2001. “Tales of the Witchblade” #1, also featuring a tale by Anne Bonny, was released in November 1996 two months after Bonny made his appearance in “Witchblade” #9. Altogether, the series would be an anthology series from various Witchblade wielders mostly consisting of a plan with a pair of two- and three-issue stories. A collection of the series is out of print, if it ever existed in the first place, but “Tales of the Witchblade” is currently being reprinted in “Complete Witchblade” collections. (Volume 1 contains #1/2-3, Volume 2 #4-8 – not sure why they didn’t include #9 in this collection as it ends the story of “Raquel”). This week we’ll be looking at “Tales of the Witchblade” #1/2-2. Issues 3 and 4 are a two-part story and would be best bundled with the next batch.

This first batch of “Tales of the Witchblade” is part of the reason I’m fascinated by this Artifacts line. They provide a “Grendel Tales”-like experimental space for this franchise where, through the story, you can summarize and show how the Witchblade would interact in different generic aesthetics. Number 1 is the pirate adventure. The second number is a medieval fantasy. The ½ issue published in Wizard Magazine is a post-apocalyptic cyberpunk story. I say aesthetic because their plot and narrative structure is largely the same with the discovery and communion with the Witchblade. These recurring narrative elements help define what Witchblade is across the variety of reference points. Within this variety of aesthetics is also a changing artistic team. Billy Tan goes from #1 inking to co-writing and co-inking #2 with David Finch. The credits for these issues are by no means clean with multiple stories per credits and writing credits often split between consistent writer Christina Z and normally the cartoonist, but it’s also a byproduct of both time and of the collaborative nature of comics. I wouldn’t say any of these isolated issues are great. The most successful overall is #1/2 by Z and Nathan Cabrera who are forced to produce a twelve pager that would fit in a “Megazine”. Interestingly, this is the issue where this era bearer is not the center of attention and most macguffins have fleshed out to some extent. But even if these issues don’t achieve greatness in their 22 pages, they’re good enough (with some trepidation) to evoke the imaginative potential of comic books and superhero comics in general. Everything can be a superhero story from a certain point of view.

“Tales of the Witchblade” is the story of how Anne Bonny came to own the Witchblade, making it a prequel to “Witchblade” #9. don’t care, the male-eyed cheesecake is just boring and so not my jam, Z and cartoonist Tony Daniel are doing a first for the franchise: physical humor! As Jack and Bonny’s crew search for the mysterious treasure on the island, the living island slowly consumes their crew in a series of dark and humorous murders. As they cross the jungle, suddenly a carnivorous plant traps one of them and spits out his heart! The moment is not openly played for laughs. The sudden shift to jagged edges and angular panels, a break from the contained square/rectangular design reinforces the sudden and gruesome act of being eaten alive. The humor of this kill is the extensive use of onomatopoeia, emphasizing the burp of the plant as it spits out the heart. This murder took up two pages, subsequent murders are one-page affairs – often one to two panels – whose brevity is their humor. The decision to keep the comic in Anne Bonny’s POV helps limit readers’ perspective and more effectively plays up the idea that the island is alive and ready to catch them.

Also noteworthy in this issue is the transformation sequence once Anne puts on the gauntlet. Does it feature an impossible spine-breaking pinup? Yes. Page as a whole, however, plays the sequence like Magical Girl-esque with an emphasis on Anne/the page turning like Sailor Moon or Linda Carter.

If you want more Anne Bonny comics, check out “A Man Among Ye” written by Stephanie Philips with various artists.

The second “Tales of the Witchblade” has a lot of unfulfilled promises. Set in the Kingdom of Sicily, 1213 AD “Witchblade” tells the story of Annabella Altavista. We go from a pirate adventure to a medieval fantasy… with the sudden appearance of a demon. Honestly, there’s a lot going on in this issue and yet the flow is choppy. Annabella stays with an order of monks who protect and attack the Hand of God, unknowingly the Witchblade. This configuration first made me curious, maybe it could go into a meditation on patriarchy and misogynies for fear of not so much “losing” power but even sharing it as Benedetta. This didn’t happen because pages after learning that Annabella is 18 she is sexually assaulted by one of the monks who then flees to the neighboring Swamians! What just happened is not really meditated on. Annabella’s feelings aren’t really taken into account, as the issue has to move quickly into the action sequence of the back half of the monastery defense, which involves the sudden appearance of a demon (ok, that could actually be one of the WildStorm aliens but I’m not sure.) A job that goes to Annabella after she takes control of the Witchblade.

While “Witchblade” has tended to acknowledge at least all the ways the patriarchy seeks to control and demand women’s bodies, tossing a one-page assault scene for plot purposes is tacky. And then brush aside the aftereffects even worse. There’s dark comedy in the stupidity of the monks who act out Einstein’s definition of madness as they take turns putting on the Witchblade, only to lose an arm and bleed to death like their brother before them. 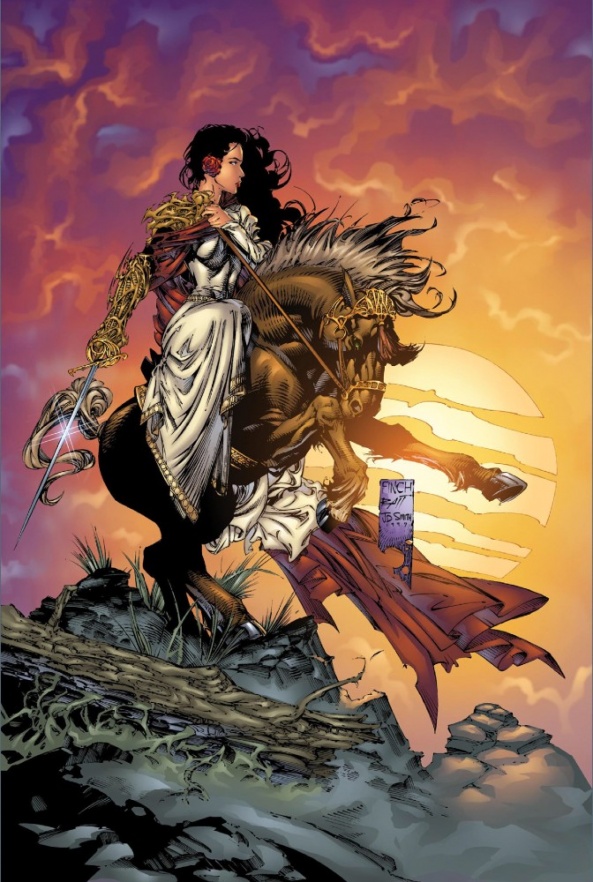 The only good thing about this problem is that David Finch’s work is really, really good. Tony Daniel’s pencils and overall shapes in the previous issue were very round and cartoonish. Finch’s work is cartoonish but in a different way with his aggressive, sharp lines that make everything look grainy. The coloring on the cover by Finch and Banning by JD Smith also deserves recognition. The overall composition is a bit standard with Annabella in an action pose on a horse, but Smith gets the band of color from this digital coloring from that era to really work with that warm purple-orange background color that makes everything pop and doesn’t seem so horribly gritty.

Issue 1/2 of “Tales” is the shortest but also perhaps the most successful of this series of issues. This tape could easily have been in an anthology like Judge Dredd’s “Megazine” theme where most tapes are 10 pages. With that kind of budget, it forces writer Christina Z and writer-artist Nathan Cabrera to compose efficiently and not aim too high. The previous problems have all escalated and to their detriment in the case of #2. The plot of this tape is explained at the top of the second page. Tommi-X9 is a bounty hunter in a cyberpunk-post-apocalyptic era and is hired to retrieve Gourge’s daughter, Persephani. Once they find Persephani’s plans go awry and the Witchblade gets involved. This being a 12 page script, they have to yada yada a few things like Tommi-X9 sensing that the mysterious mass the Witchblade has transformed into is a glove that wants Persephani to wear them, but it holds together nicely.

If you’ve read my Year 2000 coverage in Multiver-City One’s digital pages, you’ll know that I’m very much against the use of double-page spreads in this context. This consumes too much of the page’s budget. The splash of the double page before the final page works at least compositionally because it could have been done in two single pages but works like two pages.

Although the plot is simple, the character work done through the line art Cabrera and Victor Llamas gives the strip something the previous ones lacked, friendship. Persephani is the weilder of the Witchblade in this strip, but she’s not the POV, she’s Tommi-X9. Although their time as a page together is relatively brief, it’s all in service to this final page where they’ve found a partnership together to use this new power to build a better world from the ashes of the old world. Although this promise is carried over to a sequel never produced, it is one more image of hope and promise that is different from the promise of previous issues. This new promise also relies on artwork that doesn’t perpetuate the bs cheesecake that dominates this franchise. Cabera’s figure work is caricatural, they don’t branch off and isolate the female form for explicit, tired sexualization. Tommi-X9 and Persephani are allowed to simply be.

Next week, we’ll be looking at “Tales of the Darkness” with all five issues of this miniseries featuring tales of darkness as a warlord from space and near-medieval times.