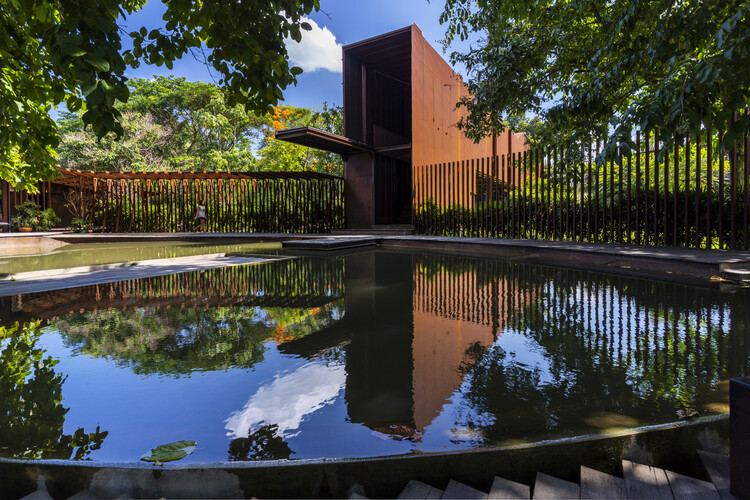 Text description provided by the architects. Spirit of Photharam Eager to explore and experience something ultra-modern, I was inspired to take a close look at the area. Finding something symbolic instead would certainly add charm and meaning to the architecture. After meticulously studying the area, I found an interesting feature that would fit perfectly to illustrate an extraordinary nuance to the composition. At the time, the earth was used for making swords, so I picked up a fascinating idea. Because swords are made of steel, using steel to forge something significant and memorable would be interesting. Once I settled with the idea, I decided to incorporate the question of time. Steel is a material that causes rust and erodes over time. I decided to use this material and incorporate it into the design and layout which will fit perfectly with this colossal tree in the middle of the area.

I designed the structure as a tunnel to disguise the fact that the floor was at different levels. A tunnel would serve as a gateway to the river. I wanted to shift the focus to the huge tree that might obscure the view of the river. This is where the tunnel comes in because its main obligation is to give the impression that there is a lot of distance and depth, using both matter and light, so that the concept of time comes into play. in place.

Originally wanting to put time in the spotlight for the project, waiting for the steel to slowly rust and erode until it eventually naturally changes color would definitely take too long. Therefore, I decided to find the best positioning by working with light and shadow to let the sunlight through. Designing an atrium would give a feeling of space and light to the tunnel, however, I decided to design an abundance of linear atriums instead of one large one to form horizontal and vertical beams of light. From 8am to 5pm, I spent an hour working on each linear atrium and walked to the end of the tunnel.

When visitors reach the end of the tunnel, they will be surrounded by pure nature, sunlight, gentle breeze and a gigantic tree nestled on the edge of this vast river. Besides the river, visitors will also notice a pond. I wanted the pond to be natural so I decided to use river water as the color changes with each season. Whether clear, cloudy or red, it would look much more organic than using chlorine or salt water. The reflection of the tree striking the surface of the water certainly communicates the “dimension of time”. The central part of the whole space is on the balcony on the second floor and looks like a diving platform rather than a balcony. Visitors will be able to take picturesque photos of themselves standing on the platform where their reflection will beautifully strike the surface of the pond.

Not wanting the restaurant to obscure its natural landscape, I decided to situate it in a corner. As the water element is a precious commodity and plays a huge role in the design, the pond surrounds the whole structure. The construction of the building is partly inspired by the authentic Thai style, in the shape of an arch, with a slightly curved roof. With this project, I wanted to combine subtlety, state of the art and above all history to compose a fresh and contemporary setting and make it exist.