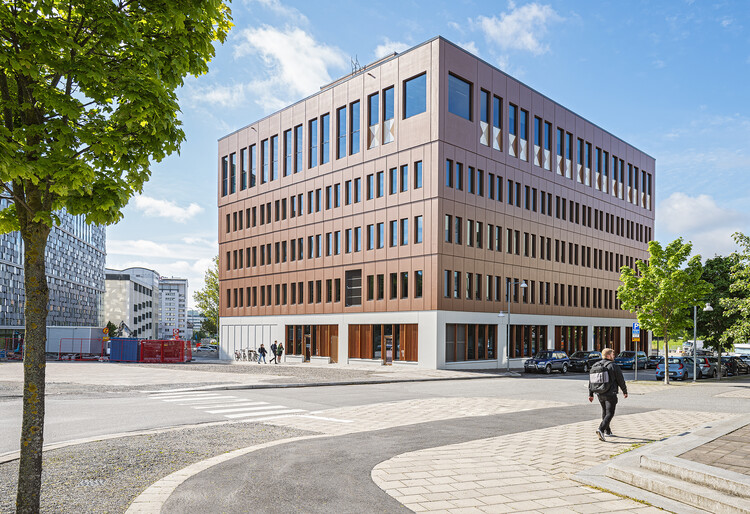 Text description provided by the architects. Kv Ledvolten is centrally located in the new and growing district of Ulriksdal in Stockholm, Sweden. The volume is partly triangular and detached surrounded by streets on three sides and a square to the north. Its volumetric presence is preponderant when arriving on the site. The triangular shape and its narrow angles create playful geometric relationships with the context and give the building a strong sculptural character.

Facade. Like a city palace, it´s divided into three drives: the entrance floor in the form of a plinth of gray lightweight glass concrete and timber frame partitions; “the body” made up of three floors with a repetitive opening rhythm; and a double-height top floor, “the crown”, which provides a spectacular 5m high ceiling space for tenant social activities.

Each floor protrudes 5 cm, which contributes to the characteristic appearance and the playful volumetric character of the building. The successive projections allow a distribution of the masses along the facade and generate a better balance of proportions, both vertically and horizontally.

Material and color. The color was chosen based on the palette of the surrounding buildings. On the other hand, to distinguish the character of the intervention and emphasize its sculptural presence, a glossy finish has been chosen for a touch of exclusivity. The ‘body’ and ‘crown’ are constructed from precast concrete elements which are painted in a method that gives a shimmering, shaded metallic finish.

The facade on the ground floor is characterized by the relationship between the light gray concrete and the glass partitions with a wooden frame. Extruded wood fins mark their presence and take up space, while ribbons create a finer detail highlighting entry points. The recesses of the blind precast concrete walls at ground level follow the proportions and rhythm of the half-timbered partitions to form a harmonious overall composition.

Detail and Integrity. The constituent elements of the building such as prefabricated facade elements and window openings are rationally taken care of, but also well considered in relation to the volume of the building and their presence as individual details. The joints of the precast elements are subordinate to the design of the building and used as a vertical reference of the facades while the horizontal joints are formed by the 5 cm protrusions.