A team of scientists from Mount Sinai was able to discover specific regulators of the tumor microenvironment (TME) using a new functional genomics technology known as Perturb-map. The newly discovered relationships could have important implications for cancer research.

Their to research was recently published by Cell. “Our focus for this project was related to immunology as well as gene therapy,” Dr. Brian D. Brown, lead author and director of the Ichan Genomics Institute at Mount Sinai, told BioSpace. “Cancer immunology and cancer immunotherapy enable us to treat patients. Some patients have extremely effective responses to these therapies, but there are also many patients who do not respond to them.

Brown originally entered biomedical research with an interest in gene therapy. “I’ve always been interested in science fiction. I was excited to get into gene therapy, and that prompted me to get my PhD. The idea of ​​not just treating the disease, but curing it at the genetic level, was very exciting,” he said. “Right now, there’s a huge surge of interest in the field of gene therapy. COVID vaccines are the result of this progress.

Brown and his team have been using CRISPR technology in their lab for years. “CRISPR may be powerful in gene therapy. One way it is commonly used is to knock out genes. Several years ago, scientists found ways to use CRISPR libraries, which include thousands of CRISPRs, to knock out specific genes and understand what happens when each gene is knocked out. This tells us about the function of the gene,” he said. “What makes it so powerful is that you can knock out hundreds of thousands of genes simultaneously.”

He explained that although CRISPR screens are extremely effective at cell-intrinsic research, they don’t give much information about a gene’s function outside the cell. “There is a whole class of genes that only work outside the cell. CRISPR screens cannot analyze these types of gene functions. The way screens are read results in loss of spatial resolution and loss of information about what was around the cell. 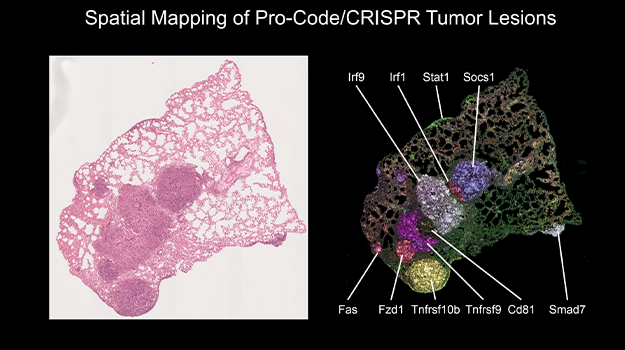 The researchers looked at the mechanism of tumors that traditionally do not respond well to treatment. “Tumors have a certain spatial arrangement of immune cells. Some of these cells are outside, while others are inside the tumor,” Brown said.

The structured arrangement of growing cancer cells, including the arrangement of B cells and T cells, has a significant effect on patient outcomes. “No matter what you do, T cells can’t kill cancer cells if they can’t get into the tumor. Patients with this kind of arrangement respond poorly to treatment.

In 2018, the lab invented a technology called Pro-Codes, or Protein Barcodes. “The technology is a way to encode CRISPR libraries without having to read them with this next-generation sequencing. The nice thing is that it allows us to code cells with different CRISPRs and different gene knockouts. You get single-cell resolution,” Brown explained.

The Pro-Code system is the basis of their spatial functional genomics technology called Perturb-map. The team applied the Perturb-map platform to deactivate genes in parallel in a mouse model of lung cancer.

The scientists removed the cancer cells from the lungs of the mice, then analyzed the stained tissue. They were able to identify the exact protein barcodes in the cells based on color staining alone. “The tumors were everywhere, but when we stained them, we could see each lesion light up with a different Pro-Code. We could see how homogeneous each lesion was for a particular barcode.

Staining also allowed scientists to differentiate between single-cell and multi-cell cloning. “We wouldn’t have known before that each tumor was triggered by a single cell, but we could see that here based on the staining. With our smudged map, we were able to trace the cancer clones.

In the past, genes could be studied individually, but this technology allows researchers to study the effect of potentially thousands of genes on cancer at the same time. “The important thing is that we’ve built a library of Pro-Code CRISPR vectors to target these genes,” Brown said. “These genes were already indicated in tumor immunology, but we had not been able to test in this way before. Each cell has an individual knockout, but this allowed us to study them in parallel. We could look at the speed and figure out how two knockouts would interact with each other. This is important in cancer immunology. 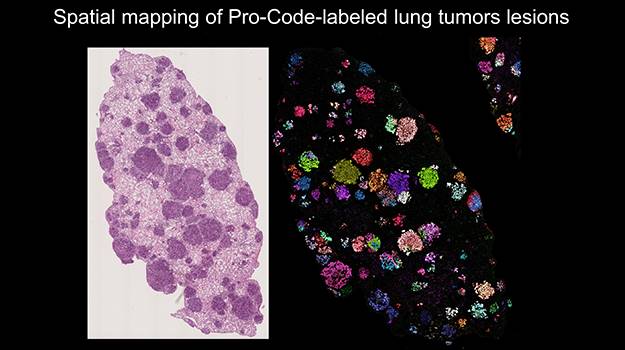 This image on the left shows a close-up of the lesions in the lung tissue before staining, and the image on the right shows the lesions after staining. “In the image on the left, the lung tissue appears to have only one large tumor or a couple. But once we stained it, we could ask new interesting questions that we hadn’t been able to before in functional genomics approaches. Before, we couldn’t even guess the exact number of tumors, and we couldn’t separate the lesions. This image shows us the exact number,” Brown explained.

The researchers compared the lung lobes of a number of mice to determine the patterns. “You can determine the number of distinct lesions, their size and their growth. You can determine if there are more or fewer immune cells infiltrating. It opens the doors to a lot of things that we couldn’t do before. It’s quite powerful, especially for the field of cancer immunology.

Imaging allowed researchers to determine that tumors grew much better, more frequently, and larger with specific genes. Compared to control tumors, they collected data on tumor morphology by simultaneously assessing a large number of genetic effects. “It couldn’t be done with the other CRISPR approach or any other functional genomics approach,” Brown said.

The ability to view tumors side-by-side using Pro-Code technology allowed researchers to determine how localized the effect of a gene knockout might be to the TME. Brown explained, “These important findings may represent a pocket of resistance to immunotherapy. When we treat tumors with a drug, we see some cells kill other cells, but these cells cannot enter the Tgfbr2 tumor. T lymphocytes are excluded from the cold tumor. Socs1 is considered a hot tumor. Warm tumors are more sensitive to chemotherapy. When we use screens with spatial recognition, we can see how a knockout influences the response to a drug, and how a gene knockout affects the local distal environment and the location of a tumor.

Brown believes biological discoveries and technology can have many applications in target discovery. “We need drugs that can reshape the tumor microenvironment. It is a huge need. There are one or two very good drugs that can activate T cells, but that’s not helpful if the cancer is using an alternative mechanism. We are trying to find out what those mechanisms are.

He explained that the technology could be used in TMEs where T cells are unable to enter. “It could be used to find out which genes are responsible for the immunosuppressive environment. Then we could let the T cells in and allow them to kill the cancer cells. Beyond that, we want to find the genes that mediate drug resistance. We can use these kinds of screens to treat animals with a drug and then see which tumors grow better or get worse compared to a knocked out gene.

The technology may be able to determine which patients are good candidates for immunotherapy. According to John Hopkinsonly 15 to 20% of patients respond well to immunotherapy.

“There are a large number of treated patients who, for reasons we don’t understand, do not respond to immunotherapy,” Brown noted. “We would like to not have to give these drugs to these patients for many reasons. They are expensive and time-consuming. We would like to offer them a therapy that will work better. It is important to identify the next class of drugs. With better predictors, doctors can more easily determine who should be put on immunotherapy and who shouldn’t.

Brown points out that before possible therapeutic approaches can be established, understanding the new biology of these processes must be a priority. “The current new frontier in experimental biology and biosciences, particularly in the field of cancer, is spatial. We have introduced spatial functional genomics here. Everyone is so excited because it helps us understand how different cells influence each other in a complex tissue environment. This is very different from a petri dish and different from a single cell model. Even with the most advanced technology before, we were losing information.

The Perturb-map approach allows for interaction-specific data. “The data showing how different knockouts influence the microenvironment and how clones may or may not influence each other is really exciting,” he said. “As a tumor grows, new mutations affect the microenvironment. We can even see the differences between parent tumors and new regions. The ability to knock out particular genes and potentially disrupt negative mutations is interesting and important. We hope that the main lessons of our work will be these important biological discoveries. »