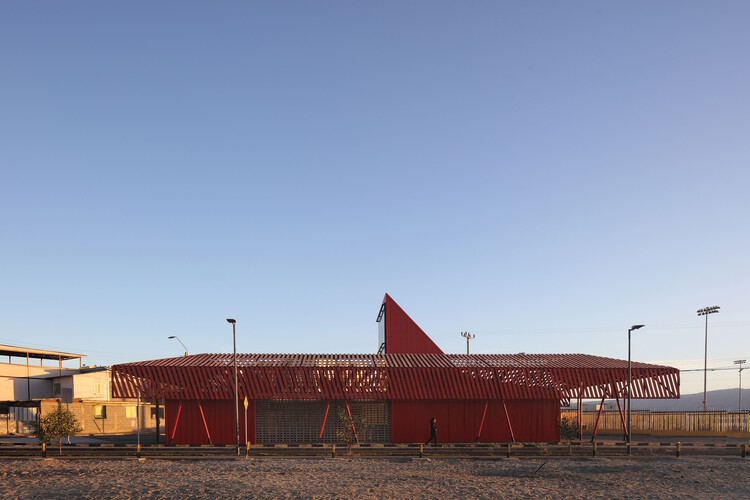 Text description provided by the architects. The Mejillones Community Headquarters project was born after the “I want my neighborhood” program, an initiative developed by the Chilean government to improve the quality of life of more than 300 vulnerable neighborhoods across the country. This popular meeting space corresponds to a project prioritized by the same inhabitants of the Salvador Allende villa. After years of negotiations, they succeeded in obtaining the land strategically located at the head of their district.

Keywords · Neighborhood, Urban regeneration, Social architecture, Public space, Chile. Villa Salvador Allende is located on the outskirts of the city of Mejillones, a town on the coastal plain, 65 kilometers north of the city of Antofagasta, in the middle of the Atacama Desert. Historically, Mejillones has been linked to a strong mining activity, since it was a shipping port for different products since the 19th century. In recent decades, industrial activity has intensified with the installation of coal-fired thermoelectric power plants, among others, which constantly pollute the sea and the air through the use of oil spills and particles resulting from combustion. Consequently, Mejillones was declared a sacrificed area, causing people from different areas to come together and carry out coordinated actions against the extractive industry. In this context, a space that functions as a meeting point for the community, which also functions as a space to do their daily activities and social interactions, appeared urgent. These gave rise to the creation of a neighborhood council and its role in resolving problems with the authorities (as seen in Decree No. 58 of 1997, on neighborhood associations and community organisations) .

Skins and good weather. In addition to the environmental problem, given its desert climate, Mejillones has strong solar radiation and SW winds that sometimes carry particulate matter and dust. This is why the infrastructure proposal evokes the idea of ​​several layers of skins that deflect and filter the wind, in addition to providing shade. A perimeter of intermediate spaces is formed, ventilating and protecting from the sun, acting as patios and circulations, taking advantage of the good weather of the coastal desert, with temperatures above 15° all year round.

Neighborhood relationship. One of the most relevant points discussed with the community was the location and orientation of the multipurpose hall. Given the experience of the neighbors with this space, the requirement was to move it as far away as possible from the neighboring houses and to orient it towards the west, where there is no presence of dwellings. Indeed, several meetings take place during the week, especially at night, after working hours. These meetings consist of workshops with music that creates noise levels that are not compatible with residential areas. In addition to reorienting the space towards the other side of the city, offices and bathrooms have been divided between the two, generating an acoustic buffer.

The Lighthouse and the bioclimatic atrium. The building, featuring a strong nocturnal use, worked on the idea of ​​a large skylight as a beacon projected towards the neighborhood. At night, when the headquarters is in operation, they reflect the interior light, warning neighbors and inviting them to participate. In the light of day, the skylight functions as a bioclimatic atrium by opening its windows at altitude, generating cross ventilation which helps with cooling and bringing additional overhead lighting to the multipurpose room.

The red color of the facades was chosen in line with the urban language of the city, since it is present in most public heritage buildings, such as the municipality, the maritime government and the library. The diagonal wood like the “Treillage” and the brass correspond to the materials used at the time of the exploitation of saltpetre in the region. Finally, the concrete block responds to the most economical and available material in the region, which is installed on the edges and performs the function of mesh.

As a second stage of the works, it is envisaged to use the continuation of the property located to the north “arrowhead” as a small community park and garden, which will contribute to increasing the level of freshness of the place, consolidating the desire of the neighbors to create an “Oasis community”.