It is the cradle and origin of Chinese ethics and culture. It is the starting point of Confucianism and the breeding ground for great philosophers, from Confucius to Mencius, among others. Jining is the most important transit center between the cultures of northern and southern China, as it sits in the middle of the important Beijing-Hangzhou Grand Canal.

Thanks to globalization, the economy has become more and more integrated and the rapid development of the Internet has formed a “global village” while other industries, especially in the high-tech sector, have increasingly developed. more converged but culture cannot be replaced.

With a cultural treasure passed down through thousands of years, nowadays the city has promoted its cultural and creative industries as a way to carry on the life and spirit of ancient culture and to showcase the unique charms of the city.

In recent years, Jining has continuously improved the configuration of cultural and creative industries, actively expanding the industrial supply chain, and creating an ecosystem of innovation and entrepreneurship that integrates technology business incubators. , accelerators and industrial parks.

Creativity has breathed vitality into the culture, stimulating industrial development, and Jining’s cultural resources keep an eye on the world at large.

Inheriting the inheritance of Confucius

Kong Kai, 35, is the 76th generation of Confucius descendants. Today, he has a special role as executive director and host of the annual Confucius Memorial Ceremony.

For the past decade, at the ceremony held at the Temple of Confucius each September 28 on Confucius’ birthday, Kong has read the tribute in a thoughtful tone and cadence.

The annual ceremony is a big festival for regions deeply influenced by Confucianism which is broadcast on television around the world. But what people are seeing today is the result of the combined efforts and sweat of Kong and his colleagues.

The Confucius ceremony, handed down from generation to generation in history, was interrupted in 1955 and was not performed again until more than 40 years later. It was in 2010, when Kong took over the work of hosting the ceremony, that the overhaul of the thousand-year-old ceremony fully began.

Kong said that at the time, he and his team read numerous documents and sought advice from musicians who played ancient instruments and artists who participated in ceremonies before the moratorium. They also added new designs to make the aesthetics and form more acceptable to modern society. For example, after having “translated” old traditional sheet music and introduced modern touches, the team adapted certain notes to make the melody “playable”.

“The Confucius Memorial has been celebrated since ancient times and the current ceremony mimics rituals, props and costumes, and combines modern etiquette,” Kong told the Global Times.

He believes Confucianism is an important part of Chinese culture. Performing the ceremony allows future generations to find their own roots and experience the charm of traditional Confucian culture.

On September 28, 2021, a grand ceremony to mark Confucius’ 2572nd birthday and pay homage to the great ancient philosopher was held in Qufu, Jining. Hundreds of people took part in the ceremony at the Temple of Confucius, including senior local officials, foreign envoys, scholars and descendants of Confucius. Similar ceremonies are also held in China and South Korea.

This year, items showcasing efforts to combat the COVID-19 pandemic were also added at the ceremony.

“It’s like preparing an annual report for our ancestors,” Kong said, “but it is also necessary for people today to understand that we have to remember, show respect and be in awe of certain things.”

Nowadays, Confucius Ceremony is the most important event at Confucius Scenic Site in Jining. During this time, many products have been created and promoted around the city’s greatest cultural icon.

In October, a personalized popsicle with Confucian elements was released in Qufu. In four days, sales volumes had exceeded 40,000 units.

Although impacted by the pandemic, revenue from the sale of Confucius-related products reached 7 million yuan in 2020 ($ 1.1 million). Du Cheng, who is responsible for sales at the Sankong Cultural and Creative Company in Qufu, told the Global Times.

“Many parents want to buy a ferrule for their children inside the Confucius Temple,” Du said. “They think the ferrule is probably more effective.”

These cultural and creative industries could stimulate the local economy while assuming a certain social responsibility. This has been illustrated by some cultural enterprises in Jining.

More than 70 percent of the employees of the Meiyuantao Art Porcelain Company in Jining are people with disabilities. They are hired as artists in the business to draw and paint Confucius, pandas and flowers on porcelain and paper in the unique style and skills used only in Jining.

Seven years ago, following suggestions from the local government, Shao Zheng, a successful businessman from Jining, started the business. “I wanted to do something to give back to society,” Shao told The Global Times.

He started by recruiting young people with hearing impairments or reduced mobility who did not affect their artistic abilities and hired teachers to train them. 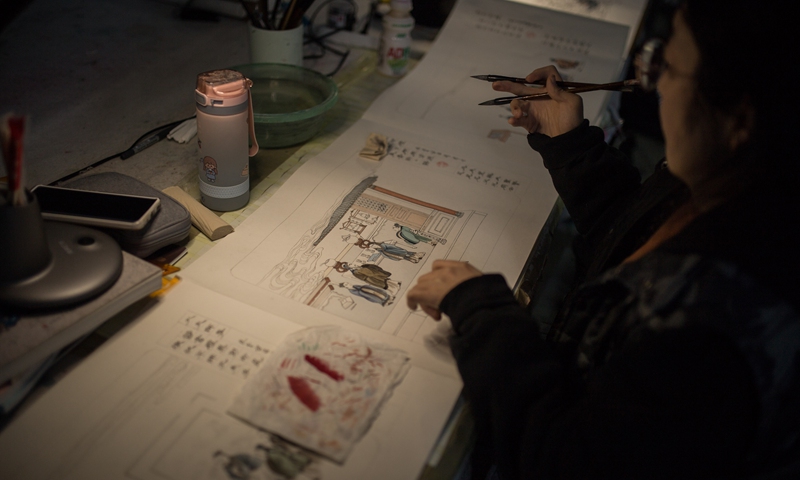 “We first helped them develop a better attitude towards work because many previously lived sedentary lives at home,” Shao said. Soon they showed their talents. “Many young people these days are barely able to concentrate on their jobs, but they have an advantage with their calm hearts,” Shao said.

Kong Dongqing, 21, was one of the “most experienced” artists in the company. She is good at coloring and often helps newcomers hone their skills.

“I never thought I could do a job that I really enjoy,” she said. “Here I made a lot of friends and shared my know-how with them.” 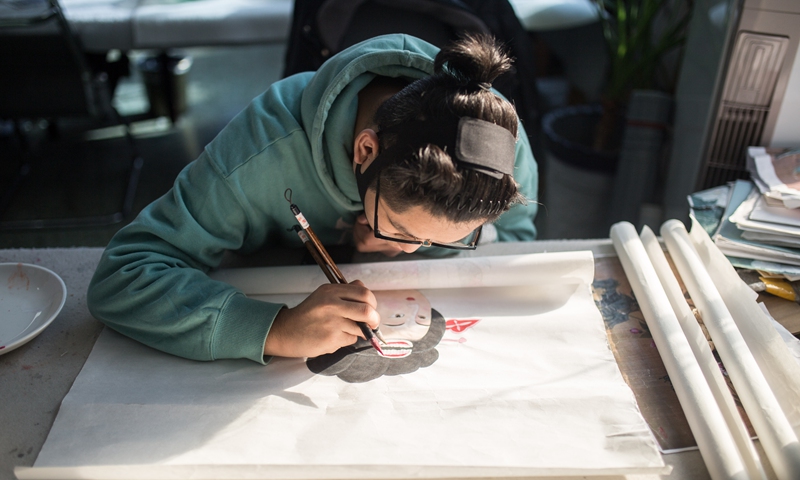 Nowadays, delicate porcelain painted with stories from the life of Confucius or other items loved by people, such as pandas, flowers and ancient beauties, is exhibited and sold in China and other countries. like Italy.

Shao’s business solved the unemployment problem for people with disabilities, and in addition “at least three couples have since met in my business and started their own families,” he said proudly. 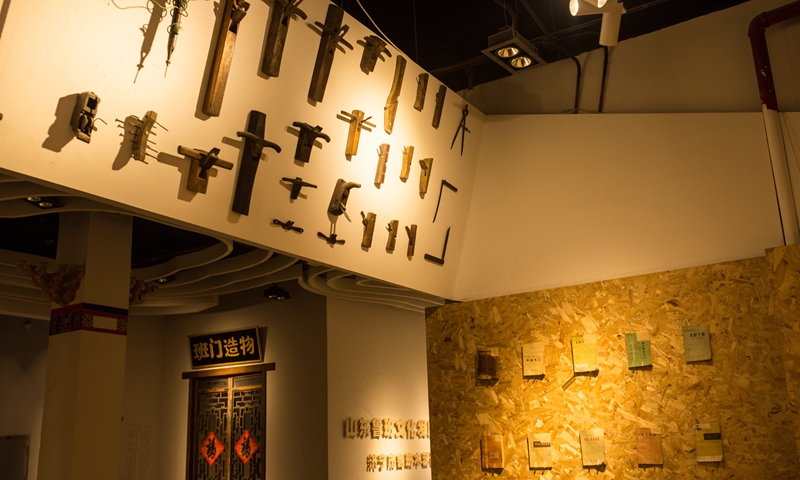 Carpentry tools and manuals are on display in the workshop of the Lu Ban Culture Development Company in Jining. Photo: Shan Jie / GT

Not far from Meiyuantao is the Lu Ban Culture Development Company, named after Lu Ban, known as the Chinese god of carpentry and masonry who lived 2,500 years ago in present-day Jining.

The workshop of the Lu Ban company is like a miniature museum of traditional Chinese carpentry. It is also a space for children to have carpentry experience, learn about tools, learn skills and create something with their own hands.

In addition, the company has developed a carpentry box with materials, tools and a manual which has been promoted in many schools in China and other countries like Singapore.

“Confucius is a representative of the arts and humanities while Lu Ban is a representative of engineering,” Lin Fang, owner of the Lu Ban company, told the Global Times. “We would like to inherit the craftsmanship spirit of Lu Ban, and the company and our products are the channels to spread its spirit,” Lin said.

Go to the world

Over the past decades, Jining’s cultural and creative industries have also explored international exposure and gradually become a calling card for the city.

Recently, a large acrobatic show, inspired by Liang Shanbo and Zhu Yingtai, debuted in Jining after two years of preparation with great success.

The story of Liang Shanbo and Zhu Yingtai is familiar to all Chinese and is known to the world as “The Butterfly Lovers”. People call him “the Eastern Romeo and Juliet”. Liang and Zhu’s melody has become one of the most iconic pieces in Chinese music.

The touching love story also takes place in today’s Jining. This is why the Jining Acrobatic Troupe decided to go ahead with the project. 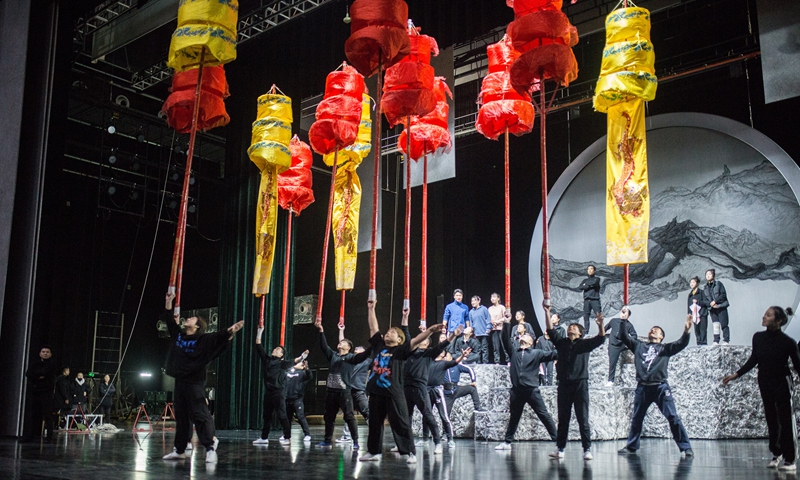 Jining’s acrobatic troupe traveled around the world, but the world tour was cut short due to the pandemic, and the troupe had to focus on planning and rehearsing Liang Shanbo and Zhu Yingtai’s show.

The performance is designed in a more international style and incorporates a modern aesthetic combined with traditional Chinese imagery, ”the director said. It is a mixture of beauty, romance, youth and moving emotion.

“After the pandemic, we would like to take this show to other countries to spread this classic Chinese story to the world,” Zhao Jiangang, director of the Jining Acrobatic Troupe, told Global Times. “The life of a good skilled show could last a very long time. We are quite patient and believe that our show will one day shine in the world,” Zhang remarked.