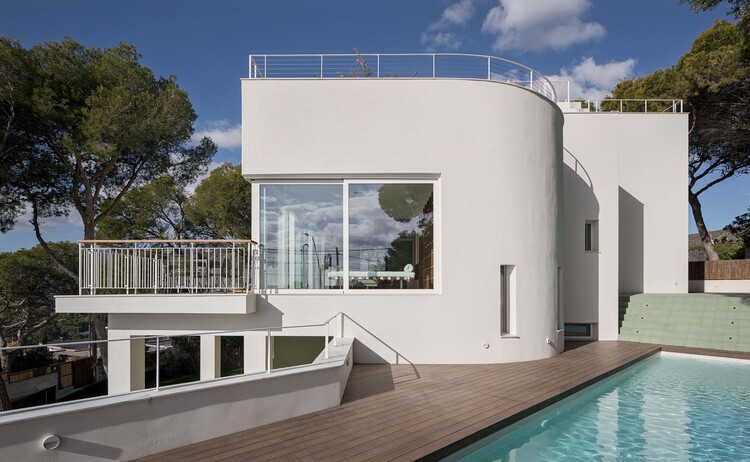 Text description provided by the architects. Between the Garraf Natural Park and its beach there is a house which, thanks to the hilly terrain of the area, offers views of the coast and the Mediterranean Sea. The structure dates from the 1960s and originally contained two stories and a rooftop addition, accessed by an exterior spiral staircase. The building, whose original form had been distorted by a series of small additions, was in a general state of disrepair due to insufficient maintenance, and the swimming pool was poorly connected to the rest of the property, making it difficult to maintain. use.

The owners wanted to enhance the original construction, modernize it and make it more comfortable both from a functional and energy point of view. The new program had to be readjusted, creating more diaphanous spaces and functionally integrating the rooftop addition with the rest of the house. Also essential are the works to enlarge the openings in the facade and to open from the inside to the outside, enhancing the views of the sea. J

The entire building has been completely remodeled to make it more energy efficient and sustainable. The facades, roofs and terraces have been restored to alleviate the conditions produced by humidity and improve the thermal comfort and insulation of the house, thus reducing its energy consumption. Light fixtures were upgraded and a new aerothermal HVAC system, equipped with underfloor heating and a heat pump, was installed. While little has been done about the overall shape of the house, in an effort to return to its essence, the structure has been stripped of all decorative features and outbuildings. Significant changes have been made to the composition of the facades and their openings in order to meet the requirements of the new interior layout and to improve the connection with the exterior.

The project included a new interior layout, notably on the first and second floors, which now revolve around a new internal staircase that leads to the second floor terrace, housing a new swimming pool that serves as a dividing line while engaging the surrounding environment. countryside. This operation breathed new life into the rooftop addition, which now houses the master bedroom. The old swimming pool has been modified to regularize the perimeter and improve the connection with the rest of the outdoor spaces.

In terms of materials, the project aimed to create bright, neutral and timeless spaces. Stone and earthen surfaces have been used in combination with bespoke furniture and natural oak floors in the bedrooms, highlighting the views of the sea and the outside surroundings. In an effort to blur the boundaries, the same materials have been used in the spaces adjacent to the house, particularly the terraces, which serve as an inward extension. This idea was reinforced by a selection of colors more in tune with the environment and its relationship with the sea. In particular, the combination of green hues and natural wood colors imitates the characteristic pine forests of the region.

The custom-made furniture, which delimits the interior spaces, is also particularly important in its layout and functionality. The project also included a new color scheme. The result of the restoration is a contemporary house in which natural light, the views offered by the immaculate location and the dialogue between the interior, the patios and the exterior take center stage.