In the 18th century, a new purple overglaze glaze emerged from a factory near Dresden, Germany. Named after a German porcelain pioneer and supposed alchemist, Johann Friedrich Böttger, this iridescent glaze became known as the Böttger luster. Why this porcelain glaze exhibited iridescence while other purple glazes of the time lacked a brilliant sheen has remained a mystery until now. This is the story of how a team of researchers solved a centuries-old artistic cold case.

Previously, no studies had been conducted on what leads to the purple glow of the Böttger chandelier. Thanks to translations of the original recordings from the factory in Meissen, where the Böttger luster originated, it was known that the presence of gold is a key element of this purple luster effect. But the shape and size of the gold particles present in the Böttger chandelier were unknown. A similar purple-colored porcelain overglaze, known as Purple of Cassius, was also produced using gold at the Meissen factory, but without any shiny effect. Why does a purple glaze appear shiny while another purple glaze from the same factory shows no signs of metallic iridescence?

Research that began at Northwestern University more than a decade ago and recently ended at Caltech under Katherine Faber, Simon Ramo Professor of Materials Science, is the first to examine the purple luster in detail. . An article describing this research has been published by the Proceedings of the National Academy of Sciences (PNAS) on April 18. Celia Chari, graduate student in materials science at Caltech; Zane Taylor, fourth-year Caltech undergraduate majoring in materials science; Sujing Xie, formerly of Northwestern University; Anikó Bezur of Yale University’s Institute for the Preservation of Cultural Heritage; and Faber are co-authors.

Thanks to transmission electron microscopy, it is possible to visualize at the nanometric scale the different layers of a fragment of a teapot with a purple glow (1 nanometer is equivalent to 1 billionth of a meter; for reference, a single strand of DNA measures 2.5 nanometers in diameter). By examining the teapot’s overglaze enamel layer at such small scales, the researchers were able to assess how its chemical structure produces the characteristic iridescence of the Böttger luster. 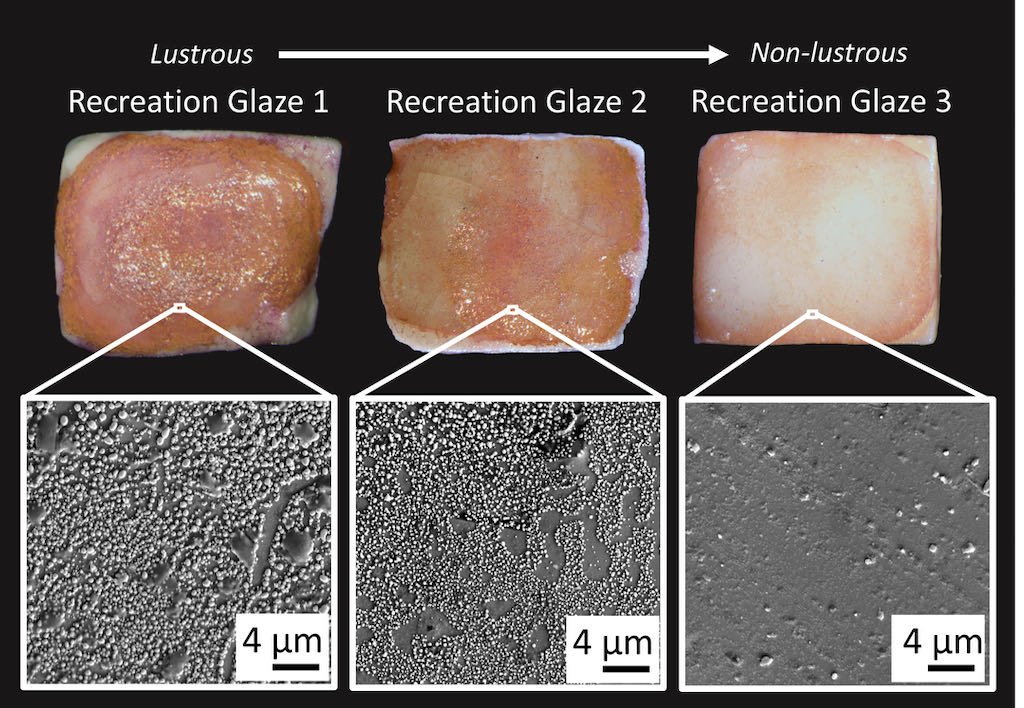 The challenges in resolving this cold case were threefold: First, access to Böttger luster porcelain is limited, with only microscopic fragments available for study. Second, the authentic Böttger luster uses gold hydrazide, which is highly explosive. Third, many materials used in porcelain glazes evaporate during firing, so it is difficult to determine the ingredients of pre-fired glaze based on analysis of the finished product, which may also have played a role. in its iridescence.

“Recess was really helpful,” Chari says. “Originally we called it reverse engineering, but I don’t think that’s a precise term to use because it’s not exactly the same recipe as used in the Meissen factory. The way we like thinking about it is that we have recreated purple luster in a safer way.”

Meanwhile, Taylor’s modeling showed that the presence of many large gold nanoparticles on the surface of the Böttger overglaze layer causes different diffraction of light shining on the glaze depending on the angle of incidence , thus creating an iridescence. Since the gold nanoparticles in the Cassius violet glazes are small and uniform in size, these diffraction variations do not exist and the glaze has a non-shiny appearance.

“By experimentally comparing our recreations and our samples, we came to a compelling argument as to what makes something glow purple or just color purple,” says Chari.

The PNAS document is titled “Nanoscale engineering of gold nanoparticles in the 18th Century Böttger Glazes and GlazesThe research was funded, in part, by an Exploratory Research Fellowship from the Art Institute of Chicago-Northwestern University.